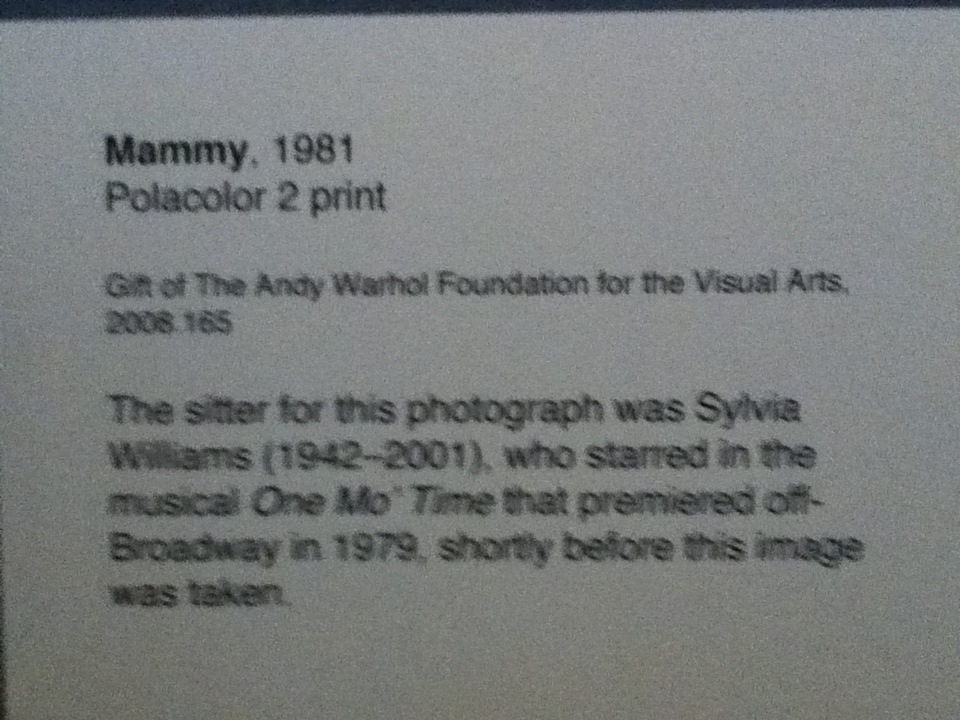 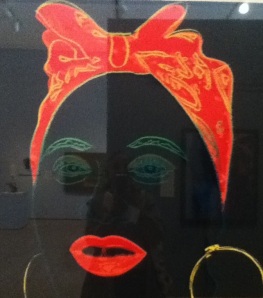 The Spectre that is Mammy

I had a friend in college. She loved big hooped earrings, watermelons and fried chicken. But for the four years I knew her, she insisted she hated them all. Her public persona when at school would not allow her to “let Whites see her as a mammy or an aunt Jemima.” Years after leaving college, I went to a barbecue at her house. There she was in the backyard eating watermelon and fried chicken. In her ears she sported a pair of over-sized gypsy hoops. What do you think of that?

I met my friend’s mammy in a Greenwich Village art gallery. There she sat in all her glory, staring at me from her perch. All done up in silkscreen and diamond dust, she and nine other “myth prints” sat next to their respective Polaroids. She wore a head scarf that was knotted into a bow atop her forehead, large hoop earrings, and had large, full lips. She sported a jet black face. Here was my friend’s bugaboo, minus the watermelons and fried chicken.

Until the Mammy print, I hadn’t paid much attention to the artist. He seemed to me an excellent print maker whose real goal was fame. In other words, he didn’t seem to be making art for the sake of making art. Instead, his creations were tied up in being famous in a kind of “Look at me! Look at what I can do!” type of art. How seriously could an under-twenty year old searching for meaning in life and in art, take such an artist? Was it even the artist’s business to seriously engage with me or anyone else? And then it happened: I started to hear little whispers, small talk about “Aunt Jemima” from the gallery crowd. Whatever his reason for including her in his repertoire of ten myths, he had begun a conversation, one that my friend was unwilling to have with me, a Caribbean immigrant. I was an outsider, times two.

Some 30 Years Later, Mammy at Stanford

Last weekend I went in search of the Warhol exhibition at Stanford’s Cantor Museum. It has been running since mid-February and closes at month’s end (on June 30th). Held as it is within the Freidenrich Family Gallery – where Stanford’s larger contemporary art holdings are showcased – it is easy to miss. The pieces that usually draw me to this gallery are the Isamu Noguchi sculpture, “Victim“, and paintings by Bay Area artists like Nathan Olivera. For this visit I went specifically to see the Warhols but of course, stopped to look at the Noguchi and Olivera as well.

The Warhol exhibition is entitled, “More Than Fifteen Minutes: Andy Warhol and Celebrity”. Had the curators been more creative in titling the show (instead of following the same old trajectory about Warhol), and had they mentioned the presence of the Mammy piece, I would have gone to see this show sooner. As it is, I almost missed it and that would have been a shame. Mammy thirty years ago and mammy today is still relevant. I had a lovely conversation with an elderly black guard who wanted to know, “Who is this Andy guy?” and “Doesn’t this mammy thing get your hackles up?”

Why hadn’t Stanford written a more stimulating advertisement than the one below?

As a Pop artist trained in advertising, Andy Warhol was obsessed with fame and the media. This exhibition features prints, drawings, and Polaroid photographs of Marilyn Monroe, Mao Tse Tung, Mick Jagger, and other contemporary icons, exploring ideas about fame, ephemerality, and the legacy of Andy Warhol. Approximately 24 works on display.

Does Stanford not believe in some of its own contemporary art shows? It does a better job advertising its Rodins and the feature exhibitions that it puts on in the Pigott Family Gallery on the main floor. This mammy print could have attracted a wider cross-section of viewers and maybe opened up a different kind of conversation about perceptions in America in the year two-thousand-and-thirteen. But the curators failed to mention the print in their announcements, choosing instead to focus on Monroe, Tse Tung and Jagger. Therein lies a huge part of the trouble with museums, art magazines and art critics: They don’t understand or try hard enough to attract a wide range of viewers and readers. Too often, they fail to engage in meaningful ways with the public and so, art remains a rarefied entity accessible only to certain types of people. It oughtn’t to be that way.

Although no mention was made of Mammy in any of the write-ups, she is the one that I spent most of my time with and she is the reason the guard and I had that conversation. Sure I was attracted to the Tse Tung and Jagger pieces, but it was she who held my attention. That guard recognized as did I, that in mammy, there is a bit of talk about us. That, for me, is the beauty of Warhol’s mammy. She exists. 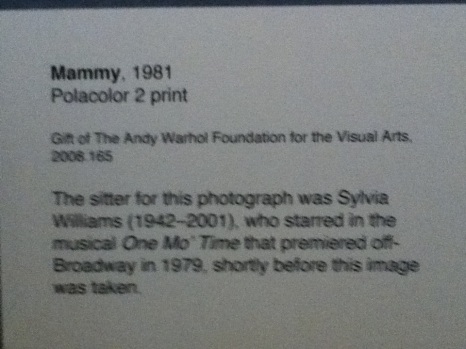 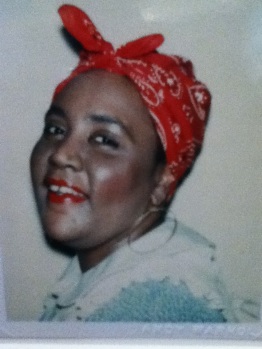 A nice touch and a nod to the Cantor, is the covering up of the Polaroid that couldn’t withstand exposure to the light. If I wasn’t so taken up with the Mammy print, I would’ve remembered what was under the cloth. If I get back to the campus before the show closes, I’ll look again and let you know.

The following photographs are ©Andy Warhol Foundation. Make what you will of the last two. I see more historical baggage, perhaps meant to startle or simply to continue a conversation long begun in a Greenwich Village art studio. Long before there was ever a Black President named Barack Obama, there was this image of Africa and Africans and monkeys all tied together into one single entity. Here stands Jean-Michel Basquiat in a Warhol Polaroid, posing as a caricature, as a monkey. Over thirty years later comes a Black/African American president and both he and his wife are referred to as monkeys. Time marches on not at all. 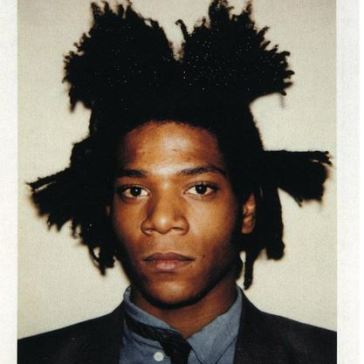 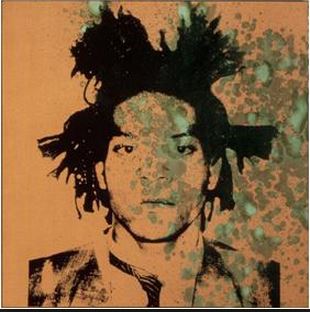 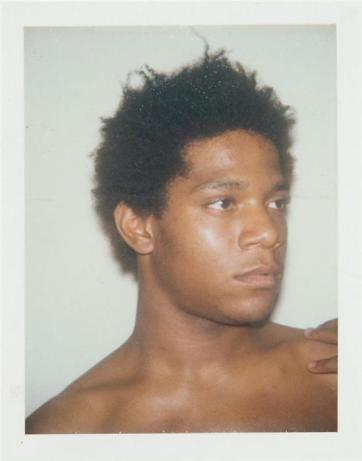 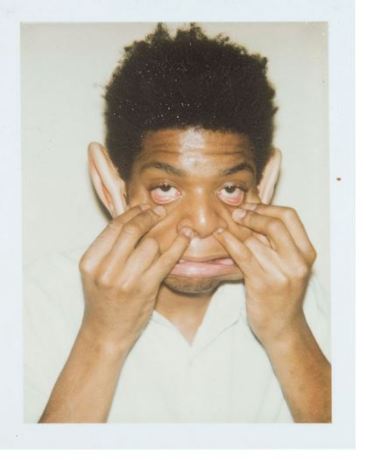