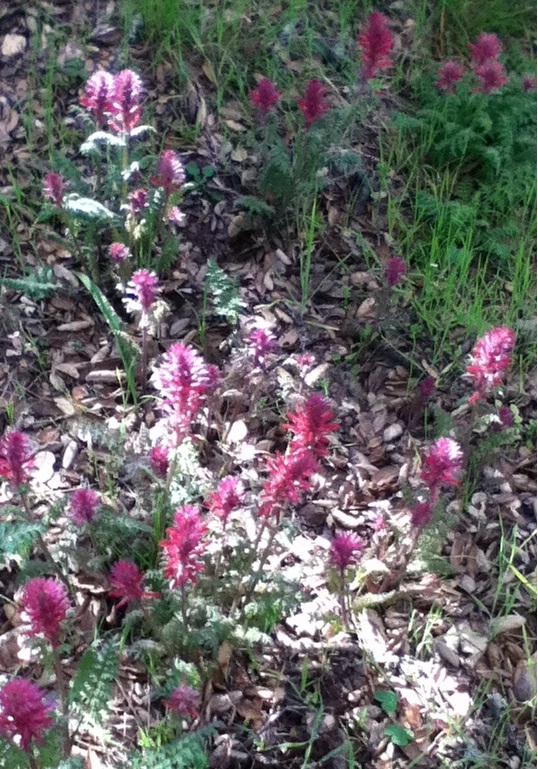 After nearly a year, I finally got onto a docent-led hike at Stanford’s Jasper Ridge Preserve in the eastern foothills of the Santa Cruz Mountains. Stanford has several studies going on at Jasper Ridge. In fact, the place has been used for scientific studies since the inception of  the university. The preserve is the site of discoveries that are important to both the scientific community and to society. Professor Paul Ehrlich’s discoveries about Bay checkerspot butterflies, for example, demonstrated the unique value of long-term research in ecology, and led to federal programs to fund such studies.

It was a nice sunny day when I visited the preserve. Many flowers and trees were in bloom. The woods echoed with bird calls. The loudest of them all was the blue and white California scrub jay. It and the ravens were out in full force as were the hummingbirds.

The ubiquitous Indian Warrior plant filled in the spaces beneath the oak trees, doing what it does, living off its host. This hemiparasiste survives in areas with hot dry summers probably because it knows to stay in the shade of trees like manzanitas and oaks. Our guide told us that a name change is afoot as Indian Warrior is a politically incorrect name. What will this plant end up being called, I wonder?

A definite treasure at Jasper Ridge is the dirca plant, several of which can be found along the edges of the chaparral. Dirca or western leatherwood are known to grow only in the Bay Area. They are rare and endangered California natives that do extremely well at Jasper Ridge. Their lemon yellow flowers are practically iridescent in the sunlight. It is more than likely that butterflies, bees and hummingbirds are drawn to this plant.

One of the most picturesque spots at Jasper Ridge is Searsville Lake which owes its genesis to the creation of the 120-year old Searsville Dam. The dam, built by the Spring Valley Water Company 1n 1892, was eventually acquired by Stanford University. Today it is part of the Jasper Ridge Biological Preserve.

Like the Hetch Hetchy Dam, Searsville has been a source of contention: environmentalists want both dams removed and the land restored to its original state. Unlike the water source(s) of the Hetch Hetchy, that of the Searsville Dam is not potable, and so, is severely limited in its use. Stanford is now trying to figure out what to do with the dam and consequently, the lake.

There is no disputing that Jasper Ridge is a special place for wildlife, flora and fauna alike. While there I was treated to the spectacle of hole-ridden trees where acorn woodpeckers had hidden their loot. I came across an emerald green hummingbird with a flash of red, an Anna’s Hummingbird. There was no point looking for the orange and black Bay Checkerspot butterfly that once made this place its home. Endemic to the Bay Area, the Bay Checkerspot was last spotted at Jasper Ridge in 1998.

To learn more about Jasper Ridge and also about the Bay Area’s voracious appetite for water, visit:

To learn about the green, sustainable field station at Jasper Ridge, visit: http://jrbp.stanford.edu/fieldstation.php. If you ever visit Jasper Ridge Preserve, remember to look for the hole-ridden tree that is adjacent to the the field station. It is but one of many such caches on the preserve.