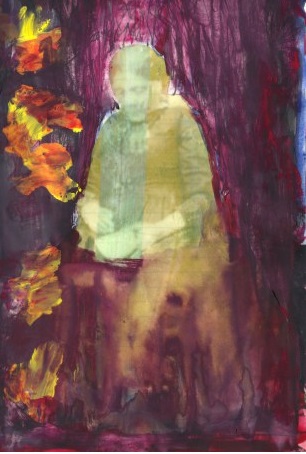 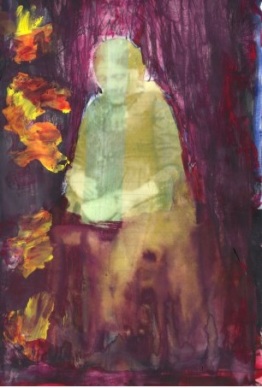 For more on Carmen and why she became an artist, read her 2010 interview with The Guardian. 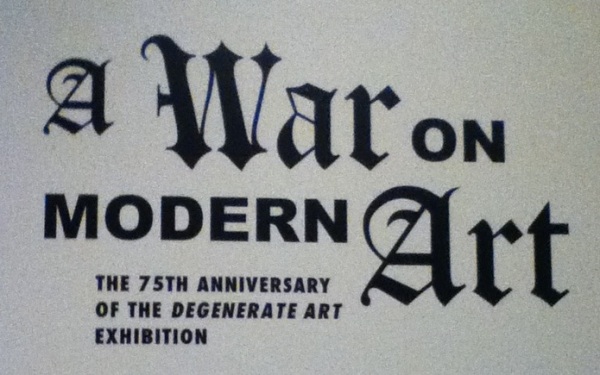 The title of this current exhibition at The Cantor Museum is rather disconcerting:

A better title for the show would have been, “A War on Modern Art: The Notorious Hitler/Nazi Purge of 1937,” or quite simply, “The Entartete Kunst Show.”

The infamous Nazi art exhibition of 1937, Entartete Kunst, sought to stamp out certain art forms, including abstraction. It had the opposite effect. By drawing attention to modern art, the Nazis helped to make it unforgettable.

Wassily Kandinsky, the Russian painter and theorist, has been credited with creating the first purely abstract Western artworks. He taught at the Bauhaus until the Nazis closed it in 1933. His use of colors, shapes and lines so offended their sense of beauty that in the Entartete Kunst exhibition, they declared his art to be “crazy at any price.” Included in the current Cantor exhibition are several Kandinsky pieces that are representative of the ones featured in the 1937 show.

In 1929, The Great Depression hit Germany hard. Over five-million Germans and Austrians were out of work. The “unacceptable” were blamed for infecting the society. Anything and anyone violating the Nazis’ sense of classical German beauty (Aryan) were deemed degenerate and therefore, to be destroyed. In defense of this destruction, Joseph Goebbels, Hitler’s Minister of Propaganda, is heard declaring on archival film, “Der Fuhrer liebt die Kunst, weil er selbst ist ein Kunstler” (The Feurer loves art. He himself is an artist).* Unfortunately, this love extended neither to abstract/modern art nor its creators.

Book burnings began in Berlin in 1933: German and Austrian books were burned alongside books by “corrupting foreign influences.” This included books by Ernest Hemingway, H.G. Wells and the German playwright, Heinriche Heine. Heine, in his 1821 play, Almansor had written the following line:

“Das war ein Vorspiel nur, dort wo man Bücher verbrennt, verbrennt man auch am Ende Menschen.” (“That was but a prelude; where they burn books, they will ultimately burn people also.”)

The 1937 Degenerate Art show featured many of Kandinsky’s works, including an edition of the book, Klange (Sounds), and the portfolio of twelve prints entitled, “Kleine Welten” (Small Worlds). None of the works in The Cantor’s exhibition were actually in the Nazi sponsored art exhibition but both shows feature(d) a copy of Klange and several prints from Kleine Welten.

Also on view at The Cantor is a reproduction of the 1937 Nazi exhibition catalog (in both German and English). This too, was disturbing and did what it was meant to: It shocks the visitor by its immediacy and also by its accessibility to the English-speaker.

Over one-hundred artists and six-hundred pieces of art (including illustrated books like Kandinsky’s) encompassed the Nazis’ 1937 art exhibition. When the Degenerate Art Law was passed a year later in 1938, the Nazis had confiscated more than 16,000 objects of art.

Chilling and voyeuristic are apt descriptions of Julien Bryan’s 1937 short films. The documentary of the museum goers viewing the show is numbing, disturbing, evocative and sad. You wonder which attendees will become murderers  and who will be murdered. What are visitors thinking as they view the show? Is each visitor thinking for himself or has he allowed his thinking to be sanctioned by the State? Who, at that show, will help those in need and who will turn on “the other?” You wish you didn’t know how it ultimately ends.

Three links to various Bryan documentaries are embedded below. These are silent, black and white films. Because they are soundless, they are all the more harrowing. They have a certain magnetic pull, drawing the viewer in in a way that modern films do not. In their silence they force you to pay attention, to listen with your eyes.

Who was Julien Bryan? He was an American photographer, filmmaker and documentarian who traveled throughout Europe in the 1930s. He tried to warn America of the dangers of Nazism and Fascism based on what he saw in his travels abroad, in Russia, Poland, Germany and Austria. His documentary films of the era are now part of the public domain. Access them here: